This weekend my reading was

by Heinz Kurz. It really is brief, just 183 pages, starting with the Ancient Greeks and ending with behavioural economics and RCTs. So it sets out the broadest outlines of economics, with a strong bias towards macroeconomics and thinking about economic systems. Marxism is covered – indeed, gets a whole chapter of 14 pages – but industrial organisation is absent save for a bit of Schumpeter and a bit of new institutional economics. 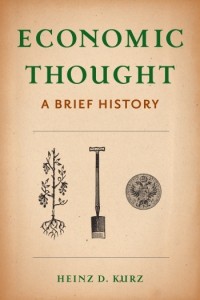 Within its self-imposed limitations of space and selectivity, the book does a decent job in outlining the key features of, say, classical thought and the marginalist turn – for example, Kurz emphasises the introduction of the emphasis on the flow of commodities produced each year in classical thinking. I learned a few new names: Hermann Heinrich Gossen, anyone? I hadn’t heard of him before, but learn here that he introduced the earliest version of marginal utility theory. I thought the discussion of utility theory is particularly good. Kurz writes:

“Compared with cardinal utility theory, ordinal utility theory – with its rejection of interpersonal comparisons – dramatically privileges the individual relative to society. In this perspective, the individual, one might say, is in principle attributed a right to veto public decisions that affetc his or her (subjective) well-being … As a consequence, economic policy seems unable to improve social situations. Since every policy alternative has some gainers and som losers, how could one ever judge the gains of the former against the losses of the latter, if interpersonal utility comparisons are prohibited?”

Very clear. There are a couple of other points where Kurz highlights interesting and deep methodological issues – another one, for instance, critiques Heckher-Ohlin-Samuelson in terms of its assumption of a single homogeneous ‘quantity of capital’. And in a short section on economic geography, there’s the point that in a constant returns to scale world assumed by so much of economics (including productivity accounting), “economic activity will be evenly distributed across a homogeneous plain, carried out by autarkic units of production and consumption.”

So, some nice insights. I did find myself wondering what audience the author had in mind as he wrote. He tries to explain some concepts – indifference curves, Keynesian aggregate demand, Hicks-Kaldor compensation and Skitovsky’s rebuttal – in a couple of pages at most. Economists reading this book wouldn’t need the explainers. Normal people reading it will find these far too condensed and impenetrable. As one of the former group, I’d have traded off the attempts at explanation of basic concepts for some more of Kurz’s critique of the ideas he is covering. Still, this would be a useful book for students just starting to get into the history of thought – one step beyond

, and a prelude to a bigger book like Saadmo’s excellent

7 thoughts on “Economic thought and its idiosyncracies”