, out now in paperback. It’s a clever prism on British imperialism, taking a tour of major colonial cities and using a period in their history to explore the wider politics and economics of colonialism, and the cultural relations between the “mother country” and her colonies as expressed in architecture and urban design in particular.

The geographic and historical tour starts in Boston in the late 18th century (the Revolutionary War), then Bridgetown, Barbados (looking at slavery and the triangular Atlantic trade), Dublin (and the painful relationship between the two countries), Cape Town (as the base for the extension of Empire), Calcutta (early Indian adventurism by the East India Company), Hong Kong (the opium wars), Bombay (the apogee of Victorian Empire), Melbourne (and the distinctive characteristics of an Anglo-Saxon colony), New Delhi (and the independence movement) and Liverpool (where Empire ended on 22 April 1981 when Tate & Lyle closed its refinery and the docks stood empty, Tate & Lyle blaming EU membership and the change in trading patterns that involved).

The wide perspective makes very clear the commercial interests driving the politics of imperialism, from the slave trade to the exploitation of Indian cotton supplies and the market it provided for cheap Lancashire textiles, and the eastern triangular trade of Indian opium to China, Chinese luxuries to Britain and British manufactures to India. I can’t read anough about the Lancashire cotton industry for obvious reasons & have

There was also a *fabulous* In Our Time recently about the Lancashire weavers standing (at great cost to themselves) with the Union and the slaves during the American Civil War – Abraham Lincoln presented a statue to Manchester afterwards, in recognition of the support. 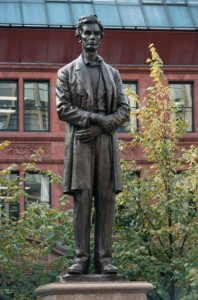 Modern globalization is driven just as much by drugs, arms and slavery, or people trafficking as we now call it; but these are veiled and never discussed in policy conversations, although of course the financial and professional support these trades require is big business. Nor do economists analyse it much; after all, you can’t download the data from the internet and run it through Stata. I often think we should take this illicit global economy far more seriously.

2 thoughts on “Economics of empire – then and now”