, I read recently a very interesting paper by David Starkie (Investment and Growth: The Impact of Britain’s Post-War Trunk Roads Programme, In Economic Affairs, Feb 2015) in which he argues that the construction of the British motorways in the 1960s and 70s had no discernible effect on productivity and growth. One reason was that pre-existing commercial traffic was intra-regional whereas the motorways radiated out from London. Contrast yesterday’s map of how the motorways were planned: 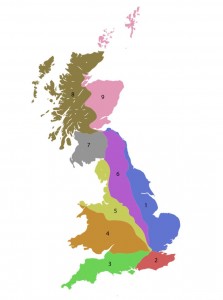 with this map from the article showing road freight patterns in the 1950s, before the construction of the motorways. 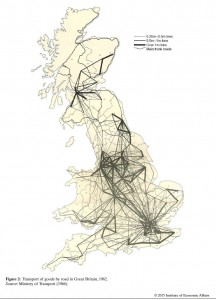 A second reason was that the productivity advantage from time saving was eaten by higher real wages and lower labour productivity. Although it is always hard to discern the effect of specific investments or technologies in GDP growth figures (as the cliometrics literature dating back to Vogel has found over and over – see Nick Crafts on why one should not read too much into the small numbers), I wholly agree with David’s conclusions:

“First, economic relationships are complex and changes can lead to unexpected consequences….Second, the time taken for institutions and commercial structures to
adapt to change can extend over decades, which suggests that the impact on output and growth will be long-term… [Third], as the structure of the economy adapts to transport improvements, there is not necessarily a (sizable) net gain but a partial shift in activity into new economic sectors and geographical areas.”

I’ve argued on the FT’s blog The Exchange that standard cost-benefit analysis does not do a good job when it comes to big infrastructure projects (like a motorway or HS2) because it is a tool for assessing marginal changes, not ones which might involve large non-linearities – behaviour changes or network effects.There is some work being done on non-marginal CBA (eg Cameron Hepburn’s paper for example) but it is not (yet?) standard practice.

Like many/most economists, I think we need much more infrastructure investment now – see for example the report of the LSE Growth Commission,

. My reading of the trunk roads article is that David Starkie would be more sceptical than I am but we certainly share the point about complex, long and uncertain responses; it isn’t about saving 20 minutes on your journey time to increase the amount of time you can spend in a meeting at the other end.

3 thoughts on “Cities, infrastructure and growth”