by James Rebanks has been at the top of the bestseller list for a while and deservedly so. It’s a terrific read and very interesting. Anybody who follows the author (@herdyshepherd1) on Twitter will need no encouragement; everybody else should go ahead and read it.

This memoir about running a small hill farm is set in a part of the country I love, having grown up in the North West of England and spent many holidays there, including my honeymoon. Most of the Lake District is a National Park, and one of the many themes of the book is the way the economic imperative for more tourism sometimes sits uncomfortably with the needs of farming and the simple fact that there are people who live and work there all the time. The holiday homes crowd out young local families, walkers let their dogs off the lead resulting in sheep dying or aborting their lambs, roads get crowded with cars. The tourists are affluent, the local families usually not – which is why so many run B&Bs on their farms. Herdy Shepherd himself has a second job as a consultant to Unesco on how to ensure tourism helps local communities. “Sometimes I am doing my other work while I am standing in the sheep shed…. A colleague on the phone might say they just heard a sheep. I tell them they imagined it.”

The book is a good reminder to visit and spend, but be respectful. And to keep your dog on its lead.

It also made me reflect about the role of agriculture in advanced economies, and small farms in particular. The Common Agricultural Policy is costly and inefficient. It substantially raises food prices in the EU, makes it harder for farmers in poor countries to sell into world markets, and mainly benefits big farmers in the UK. I certainly don’t think we should only consume home grown food; food imports are a benefit to consumers, because of variety as well as keeping prices down. The repeal of the Corn Laws was a Good Thing.

However, I’ve mellowed slightly in my views over the years. The economists’ market efficiency lens is an important one but in many context not the only one that matters – and the ability to produce local food of high quality with a respect for tradition touches on other important values. 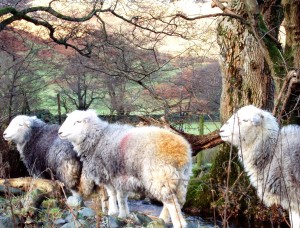 A persistent large deficit on food imports is a concern – why are British producers not better able to export? And I now think subsidising small farms (so they can compete against the industrial scale ones), rural tradition and also outcomes such as biodiversity is desirable. At least to a degree: we Brits should ideally be willing to pay a bit more for food to increase the quality of what we eat, and a bit in tax to provide appropriate subsidies, but there are a lot of people in this country with not enough money.

There’s a passage in The Shepherd’s Life about foot and mouth disease in 2001, and the family’s having to slaughter its sheep and cattle. It was an awful time in rural Britain. Rebanks writes: “Had it spread west by a few more fields, the disease would have got onto the unfenced Lakeland fells where it would have decimated the ancient hefted flocks on the commons. Ninety five percent of the Herdwick sheep in the world exist within 20 miles of Coniston and were at grave risk of being wiped out. But an essentially urban government didn’t understand …. The idea that something precious was on the edge of destruction was never really grasped.” Although many flocks were destroyed, not all. Thank goodness.

One thought on “Sheep and economists”