I’ve had a short break to celebrate my 25th wedding anniversary, and we went to Venice. One of my books was Peter Ackroyd’s

, which has lots of interesting facts but is frankly a bit long and dull. I did enjoy, though, the sections about the Venetian economy. It was the engine of the world economy in the 16th century, a bustling, dynamic trading economy, built on a marsh with no natural resources apart from lots of fish.

is excellent on this, and on the tides of economic history more generally; one of the fascinating things is how different places have had their moment. Italy’s was the during Renaissance, and look at it now. Maddison writes of the Venetian Republic: “It created political and legal institutions which guaranteed property rights and the enforceability of contracts. It was a pioneer in developing foreign exchange and credit markets, banking and accountancy. It created what was effectively a government bod market. … Its fiscal system was efficient and favorable to merchant profits and the accumulation of capital.” On the accountancy, Jane Gleeson-White’s

is a great read.

Venice was also the first centre of commercial publishing thanks to Aldus Manutius (there’s an exhibition on him now at the John Rylands library in Manchester). Ackroyd writes: “Printing was the first form of mass production technology, creating identical objects at identical cost.” Venice pioneered commercial printing and publishing, although the activity led to complaints that the technologically-driven abundance of books was making people less studious, a vulgarising influence. Sounds familiar!

One thing that intrigued me in Venice (the city, not the book) was the fact that the identity of the sellers of cheap handbags and selfie sticks in the streets has shifted. Last time I was there, five years ago, these men were mainly Senegalese. This time they were mainly South Asian. I wonder how these shifts happen? Of course, the city’s main trade these days is tourism, and all the services and goods that requires – like so many other beautiful places whose earlier economic function has vanished into the mists of time. 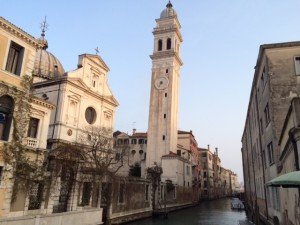