The latest issue of Fortune has an extract from a new book by Walter Isaacson,

, which is definitely on my to-read list. The extract is about the female pioneers of computing (and HT to @Dr_Black).

As it says, replugging the connections in the early computers was tedious:

“At first the programming seemed to be a routine, perhaps even menial task, which may have been why it was relegated to women, who back then were not encouraged to become engineers. But what the women of ENIAC soon showed, and the men later came to understand, was that the programming of a computer could be just as significant as the design of its hardware.”

[amazon_image id=”1471138798″ link=”true” target=”_blank” size=”medium” ]The Innovators: How a Group of Inventors, Hackers, Geniuses and Geeks Created the Digital Revolution[/amazon_image]

Of course even before ENIAC, women had had the same job at Bletchley Park during the war. (And in the same way, in the Soviet Union women dominated the economics profession – making up more than two thirds –  because their job was the vast and tedious one of calculating prices and quantities for all the goods made in all the factories around the country. Needless to say, their pay and prestige was relatively low.)

As it happens, last week I was at Harvard and saw this Mark I on display in the Science Center. Grace Hopper was one of its key early programmers. 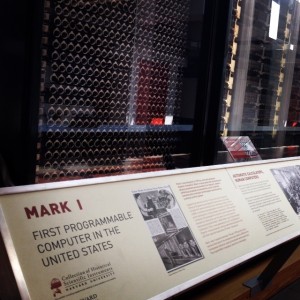 The Harvard Mark I