in Allende’s Chile because I spotted the fuss on Twitter about Evgeny Morozov’s New Yorker piece, The Planning Machine: Project Cybersyn and the Origins of the Big Data Nation. I’m not all that interested in the fuss but was very intrigued by what people were saying about the book.

It is indeed a completely fascinating history and reflection on the interaction between technology and politics, and I highly recommend it. The cover photograph gives a good flavour of the weirdness of this episode. It is the control room built in Santiago in late 1972 under the guidance of British cybernetician Stafford Beer. The control room, that is, for the economy, linking a network of telex machines in factories around the country to a mainframe computer in the capital.

While not a fully planned economy, the Allende government had nationalised substantial sections of industry and, as time went on and the American-led sanctions began to bite, planned to control key prices. It also had to contend with a nationwide strike led by businesses opposed to the leftist government. The aim with Project Cybersyn, as the cybernetic plan was labelled, was to deliver to the central authorities ample real-time information on production while allowing individual factories the freedom to make their own decisions. Government policy could be adapted quickly in response to the trends identified. In other words, it was meant to avoid the pitfalls of central planning while enabling the co-ordination benefits. As Medina puts it: “Connecting the State Development Corporation to the factory floor would … allow the government to quickly address emergencies such as shortages of raw materials and adapt its policies quickly. Up-to-date production data would also allow Chile’s more experienced managers to … identify problems in factories and change production activities in the enterprise when necessary to meet national goals.”

Apart from the obvious practical difficulties (eg only one mainframe and very few programmers), one challenge was actually modelling the economy. It is unclear what kind of relationships were written in to the code, but they must have been something similar to those embodied in the simple linear model of the Phillips Machine. For all that it was a project about managing the economy, there was just one economist on the team, according to the book. However, Medina emphasises the intended flexibility of Project Cybersyn: “The model would not function as a predictive black box that gave definitive answers about future economic behaviour. Rather, it offered a medium in which economists, policy makers and model makers could experiment and, through this act of play, expand their intuition about [the economy].” The structure embodied the cybernetic emphasis on responding to the information contained in feedback. I must say I didn’t understand Beer’s cybernetic models at all, as the language and concepts are so different from anything I’m familiar with – but then cybernetics itself comes across as rather futuristic-retro.

Beer also hoped to have a method of getting real-time feedback from the people to the government by installing ‘algedonic meters’, or dials indicating their happiness or dissatisfaction, that would be installed in community centres or public places. This part of his plan was never taken up. However, he was keen on getting public engagement with the project and even persuaded Chile’s most famous folk singer Angel Parra to write a Project Cybersyn song.

One of the divisions within the project, well-described in the book, was between the technocrats who saw it as a tool for managing the economy more effectively, and those who saw it as a means of reverse engineering politics and society on the ground. The latter group hoped workers in the factories would develop their own sense of autonomy through inputting information into the telex, and understanding in this way the part they played in the whole. “[Beer] believed that engineering a technology also provided opportunities to engineer the social and organizational relationships that surrounded it.” The technocrats tended to dominate, though, largely because of the growing difficulty Allende’s government had in sustaining its coalition. Politics didn’t co-operate with the technology.

One of the interesting aspects of Project Cybersyn is that the technologies it used were not the most advanced. The US blockade largely prevented Chile from importing more computers or sophisticated equipment. Aside from the one mainframe and the telexes, the futuristic control room used slide projectors and hand drawn slides. The fibreglass control chairs, based on Italian designs, were one of the most cutting-edge aspects of the control room. And yet the project was the most ambitious cybernetics project ever (partially) implemented. 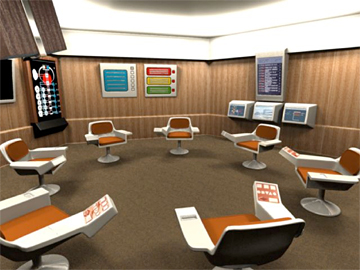 It’s hard to decide whether the people behind Project Cybersyn were crazy dreamers or just 50 years ahead of their time – what would they have made of the possibilities of the web and ‘big data’? The basic cybernetic question the project poses remains valid: can policymakers do a better job with rapid real-time feedback on economic indicators – or is the economy as a dynamic, complex system simply beyond the kind of mapping implicit in any such project? Can what is measured about the economy reshape the economy or underlying social order in turn – and what does that imply for the indicators one might try to include in a Project Cybersyn 3.0?

PS After finishing the book, I read the Morozov column. It is a precis of the story told in Medina’s book, with a handful of extra paragraphs woven in that give his own reflections on the issues raised – including, for example, exactly the obvious ‘what could we do in the era of the internet of things’ question. If the column had actually been billed as a review of

, I don’t think there would have been any fuss. While not plagiarism, as the book is the only source mentioned, for Morozov to have given it just one passing mention in the ‘Critic at Large’ section seems ungenerous.