An intriguing book has turned up: Art and Economy, the first volume of a catalogue of projects on the global economy supported by the Landia Foundation and Universität der Künste Berlin.

One project is Michael Marcovici’s Rat Trader. The book describes the training of laboratory rats to trade in foreign exchange and commodity futures markets. Marcovici says the rats “outperformed some of the world’s leading human fund managers.” The rats were trained to press a red or green button to give buy or sell signals, after listening to ticker tape movements represented as sounds. If they called the market right they were fed, if they called it wrong they got a small electric shock. Male and female rats performed equally well. The second generation of rattraders, cross-bred from the best performers in the first generation, appeared to have even better performance, although this is a preliminary result, according to the text. Marcovici’s plan, he writes, is to breed enough of them to set up a hedge fund.

The point the project makes is that trading does not require human interaction. It prompted in my mind as well the question of the circumstances in which the standard assumptions of rational self-interested maximisation apply – whether by humans or rats or any other creatures – and when we should be looking to adopt alternative ‘behavioural’ assumptions.

I also liked Anke Strauß’s The Mechanic and the Machinic: Thoughts on Economic Systems. The essay argues that machine-metaphors for the economic system – “calculable, controllable and manipulable” – are sterile. “Mechanics always need an outside stimulus, some kind of energy.” Worse, “We are the weakest link in a world that has a mechanical way of thinking.” Schumpeter is the hero of economics in this essay.

I’ve not finished reading yet but it’s a very intriguing catalogue. 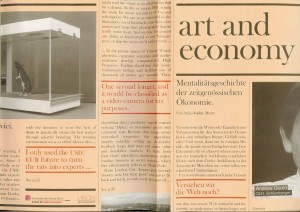