, I’ve found plenty of interest but am not yet bowled over as some reviewers have been. Still, 400 pages to go. I’m not going to live tweet the reading experience but will pick up on some interesting points as I go along before perhaps attempting an overall review.

“One conclusion stands out in this brief history of national accounting: national accounts are a social construct in perpetual evolution. They always reflect the preoccupations of the era in which they were conceived. We should be careful not to make a fetish of the published figures.”

Too many economists pay no attention to the figures they are using, simply downloading time series from handy databases and telling stories around them. This chart showing ONS revisions to 1990s UK GDP data (or something similar) should be pinned above every economist’s desk as a reminder that the figures, although they’re all we have to measure the tide of economic events, are as broad brush as can be. The late 80s boom was even boomier than we remember, but the subsequent bust far less severe. As a reminder, there were a few things happening in 1992 – a general election in April, double digit interest rates in the summer, ‘Black Wednesday’ in September. 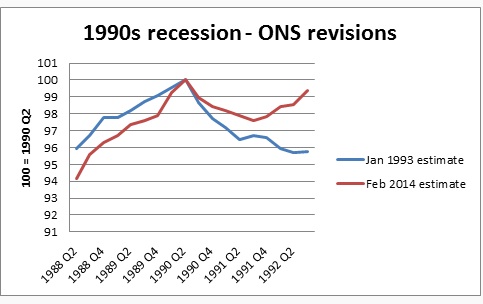 The present national accounts – as I describe in my book – co-evolved with Keynesian macroeconomics. The accounting identity C+I+G+(X-M) segued into the theory of aggregate demand and its successors. We’re stuck with GDP until the next Keynes conceives a theory of aggregate dynamics fit for a largely intangible, service and information driven economy, when there will have to be a different statistical framework.

5 thoughts on “Capital, statistics and stories”