The economics profession has a less than stellar reputation for its forecasting ability, so asking some economists to make predictions for a hundred years from now is a bold move. Yet that’s what Ignacio Palacios-Huerta did for 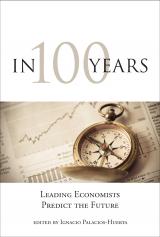 One of the inspirations that led him to invite mainly US-based, highly eminent economists such as Daron Acemoglu, Robert Shiller and Robert Solow to think so far ahead was the famous 1930 Keynes Essay,

, and it is a starting point for several of the contributions. So, not surprisingly, a common theme is the likelihood of continuing technology-driven improvements in living standards, health and longevity in the long term – despite the clear short-term challenges. But another common theme to many of the essays is one not on Keynes’s horizon, namely the unknown but potentially catastrophic risks posed by climate change. I think many people who dismiss economics as not taking environmental issues seriously might be surprised about how many of these contributors address the question.

Overall, the tone of the essays is generally positive – Andreu Mas-Collel argues that economics should be called, not the ‘dismal science’ but the ‘cautiously optimistic science’. However, none of the economists ignores the reasons for pessimism. Apart from climate change and environmental pressures, they differ more in their pessimism than in their optimism. Daron Acemoglu focuses on ‘counter-Enlightenment’ fundamentalisms or other anti-modernist movements as a political force that will run counter to continuing progress.

In the most interesting essay in the book Ed Glaeser – an economist who has always worked creatively in the areas where economics borders the other social sciences – raises the possibility of social fragmentation in what he calls the ‘self-protection’ society. In addition to the fragilities that come with global interconnectedness – pandemics, terrorism and so on – he writes: “One recurring fear is that this prosperity will produce a self-protective society, more interested in keeping what it has than in creating change. Human kind has become wealthier precisely because we have taken risks.”

He also in this essay brings us the eye-opening fact that on average Americans spend almost as much time watching TV (2.83 hours a day) as working (3.2 hours a day) – as he comments wryly: “It seems quite possible that the recent technological change that has created the most benefit is the proliferation of cable channels.” Whether this is progress or not is another question. What would Keynes have made of Fox News or HBO?

2 thoughts on “Would Keynes see Fox News as progress?”