The 2nd Festival of Economics in Bristol, which took place over Thursday to Saturday, was a great success. There were many more people attending than in the 1st year, and the quality of speakers, questions and debate was fantastic. The aim of the Festival is to get economists and members of the public in discussion about profoundly important trends and policy questions – obviously, the appetite to do so is quite large.

The Arnolfini Bookshop serves the Festival with an outpost selling books by various speakers. We also launched the Perspectives series there this time, with two of the first group of authors, Julia Unwin and Bridget Rosewell in attendance. 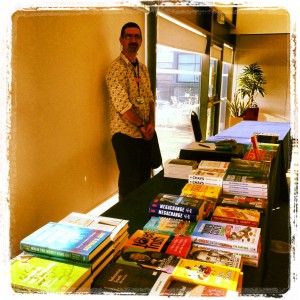 One of the liveliest parts of the day was a vigorous debate between David Walker (a sociologist by training, @Exauditor77 on Twitter) and economists Paul Johnson of the IFS and Sarah Smith of Bristol University’s CMPO. It even got the audience heckling, on both sides. The debate is on Twitter under #economicsfest. Briefly, Walker said economics has nothing to offer the debate on public service reform because of information asymmetry and spillovers. Sarah Smith pointed out that the economics of public services recognises exactly those features, but agreed that economics needs to pay more attention to the transactions costs and monitoring of outsourcing. Paul Johnson argued that the policy debate relies too much on a simplistic Econ 101 version of economics, and all the economists concluded that people need to learn much more economics…