I’m not going to add to the ink/electrons expended on the UK economic policy proposals emerging from the party conferences so far. Reading about them so far – and with more to come next week no doubt – sent me back to a couple of fascinating books I have on my shelves. One, published in 1958, is

by Andrew Shonfield. The other is a 1984 book with the superb title

by Keith Smith (as if the country had transitioned from having an economy to having a permanent economic crisis – well, it can feel like that).

One of the dispiriting things is how much of the diagnosis seems relevant in successive generations.

Shonfield writes in his concluding chapter:

“The central failure of postwar Britain is inadequate investment. So many of our difficulties flow from this. Because our wealth grows more slowly than the wealth of other countries, our prices rise faster… the balance of payments is like a raw and exposed nerve… It is bad for the spirit of any country to live with so little room for manoeuvre. There is a noticeable meanness of attitude in the British approach to the arts, to public buildings, to almost any kind of cultural activity. … It is a great depressive to live in a constant atmosphere of ‘make do’, to exist in a place where almost any effort to do anything or go anywhere leads you pretty soon into a bottleneck of some kind.”

Obviously very much of its time, but many British readers now would feel a ping of recognition.

“If output, employment and incomes are to grow in Britain, then the problems of low and poorly directed R&D activity and low industrial investment, which are at the core of Britain’s economic decline, must be overcome. … Britain’s manufacturing performance is so poor that consumption increases have not fed through into increased demand for British products, and hence to investment in British industry. Consumption increases have been spent quite disproportionately on imports.” 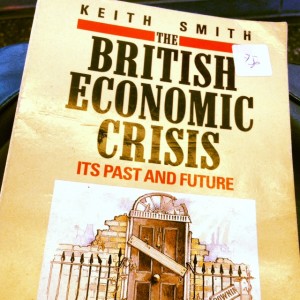 Which crisis would that be?

As others have pointed out – for example, Stumbling and Mumbling – UK business investment is weak, weak, weak. The balance of payments deficit was equivalent to 3.8% of GDP last year, the biggest gap since 1989.

7 thoughts on “The (uncomfortable) lessons of history”