Later today I’m speaking at Nesta’s FutureFest about future economic institutions, in what looks to be a terrific session, compered by Mark Stevenson, author of the excellent

. Yesterday I popped in and heard Cambridge political scientist David Runciman give a thought-provoking talk on the future of democracy. I heard him speak on democracy in the 2011 Princeton University Press lecture, and his book

[amazon_image id=”0691148686″ link=”true” target=”_blank” size=”medium” ]The Confidence Trap: A History of Democracy in Crisis from World War I to the Present[/amazon_image]

The quick summary (based on my tweets of a 15 minute talk) is that political institutions have not kept pace with technological change – indeed, they’ve hardly moved at all in the 25 years of dramatic advance in information and communications technologies. (Indeed, the mismatch between the pace of technological and social change is a commonplace.) However, he continued by saying that technology has in fact become the way political change has happened, to the extent it has. This manifests itself as technocracy – either the Chinese type, run by engineers, or the western type, run by economists and financiers. Technocracy is unsustainable, however. Democracy needs a reboot, by changing its scale of application, to the city level and to the supra-national, continental level.

It sounds intriguing enough to make the book a wanna-read. 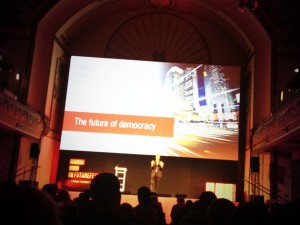