The focus of economic policy is the economy that is counted; little attention is paid to the shadow economy. The reason is partly that it’s obviously hard to direct what’s unmeasured, and partly embarrassment about the very existence of shadow work – policy is supposed to aim at eliminating it. Yet of course it forms a substantial proportion of economic activity, in fact a minimum of around 10% of official GDP (the UK is at 12.5%) and more than half of official GDP in some (mainly poor) economies. Indeed it is so much more prevalent in the developing world that it shades into activity with a different name there, the informal economy.

The measurement of the shadow economy has been almost a one man activity. That man, Friedrich Schneider, has a new book or pamphlet out with co-author Colin Williams, published by the IEA, The Shadow Economy. It sets out his most recent estimates and surveys very usefully the drivers of shadow activity and the possible policies to reduce its size. This publication is a useful summary of Schneider’s longer works on the subject, such as

It’s good to be reminded about what we don’t have measures of, as well as what we do. 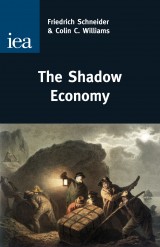 The book, which is short, looks entirely at the legal shadow economy, which is to miss the criminal activities. That’s another story I suppose, the parallel globalization by organised crime, and one that Misha Glenny looks at in his books

Economists should take far more seriously this phenomenon. It impinges, with horrific results so often, on many people’s lives and is a part of 21st century globalization.

Schneider and Williams concentrate on labour market activities. Still, even with a relatively narrow focus, this is a very useful book for anybody interested in the issue.