For various reasons, I’ve been thinking about Luddites. My husband called me a Luddite for mildly complaining that our TV set-up has become so complicated that I no longer know how to play a DVD. Seriously, though, the ‘robots are eating our jobs’ argument has been gaining traction – in the interesting Brynjolfsson and McAfee book

, in Paul Krugman’s Robots column, and assessed in this recent Economist survey article (with handy links).

Oddly this is simultaneous with the interest in Robert Gordon’s argument that the days of significant technology-driven productivity gains are over, in his paper Is US Economic Growth Over? The awesome analytical power of economics tells us these arguments can’t both be true at the same time, even if it doesn’t tell us which one is correct.

Luddites have an unfair reputation, as if they should have realised that the tide of technological change was unstoppable so why bother protesting? Eric Hobsbawm once argued (in The Machine Breakers) that there wasn’t a big difference between the Luddites of 1811-13 and the “collective bargaining by riot” that had been going on for donkey’s years. Besides, expressing opposition to one’s job becoming technologically redundant is highly (individually) rational. In my part of the world, East Lancashire, the big riots were in the 1820s – our ‘local’ riot was written up in the lovely book

by William Turner. The ‘ 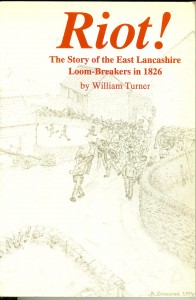 Machine-prompted industrial unrest is the result of the combination of the normal innovation-driven dynamics of capitalism with the failure of the system to find a way of sharing productivity gains outside their originating sector. So inequality, not innovation, is why the robots matter now.

13 thoughts on “Robots and Luddites”