Today I gave a talk to sixth formers at Gosford Hill School, near Oxford: “I never meant to become an economist,” was the title. (This was via the excellent Speakers for Schools initiative set up by Robert Peston.)

It was a riff on my own career history, and what being an economist means, set in the context of some of my family history and the structural changes in the economy between 1935, when my dad started work at 14, and now, as the young people think about their future careers. Here’s my dad in his first job, front row extreme right. He stayed there most of his working life, apart from the army, although after the mill closed in the late 1970s he was lucky enough to find a job as a meter reader. 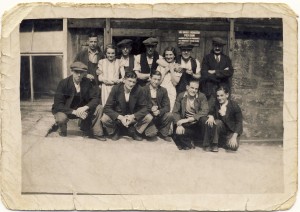 The students were extremely polite and asked lots of good questions. One was what I’d recommend them to read to see if they were interested in economics at university. Off the top of my head, I recommended Tim Harford’s

(which turned my eldest boy into an economist) or any of his books, the Keynes- Hayek rap, Thomas Schelling’s

. I forgot to mention Ariel Rubinstein’s

. There are surely lots of other good resources I should have mentioned too – but not

, which I found too gimmicky.

4 thoughts on “Advice to young economists”