I had a delightful weekend at the Pordenonelegge book festival, speaking about the new Italian edition of

. The life of an author is indeed tough. 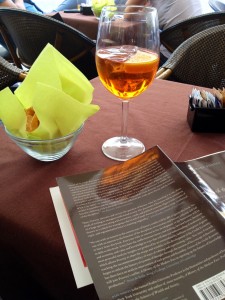 As my reading matter, I took a book (recommended by Brett Christophers, whose Banking Across Boundaries is out next year) that might be tough to get through in everyday life. It’s

by Mary Poovey. The author is an English and Humanities professor at NYU, so this isn’t a natural title for me to have picked up. But, a bit over half way through, I’m finding it fascinating.

The book traces the creation of a distinction between writing about value that became money – bills of exchange and bank notes – writing about value that became formal, ‘expert’ economic writing, and writing about value that became literary writing. What we now understand to be totally distinct genres were created so by the development of the credit-based economy in 18th and 19th century Britain and the sociological evolution of the economics profession on the one hand and literary writers on the other. A split between ‘factual’ writing about monetary or market value based on the forms of writing about natural science and ‘fictional’ writing about non-market value in literary fiction and poetry now seems natural and inevitable, but it was not always so. Once one sees this, it becomes immediately obvious that some ‘factual’ forms of writing about markets are entirely ‘fictional’. Without even going to the metaphorical character of many economic models, this statement obviously applies to the multi-hundred pages long prospectuses issued for complex securities in the run up to the Crisis (and for that matter still being issued). Nobody could possibly have read and understood these. Not that this mattered – they might as well have been tales of unicorns and dragons, containing less insight about value and values than, say, my next read, which will be