As somebody who has never worked as an academic economist but still has all the passion for the subject that drove me to get a PhD, it was with a real sense of recognition that I read this article by Alexandra Lord in the Chronicle of Higher Education. It contains this call:

“If our profession is to thrive in or outside of the academy, we need to encourage and train new scholars to write accessibly. We also need to use new media to connect with the public. Fundamentally, we must provide more opportunities for graduate students to engage with the public, and we must better reward tenure-track and tenured faculty members for seeking to reach a general audience.”

She is writing about historians here, and the disconnect between academic historians and the massively enthusiastic amateurs who read popular history books, trace family trees, track down historical mysteries, re-enact events and so on. But the slight disdain academic historians feel for popularisers described in this article is shared with other academics, including of course economists.

The disconnect is far more troubling in the case of economics, for two reasons. One is that the academic discipline is in general disrepute because of the crisis, and while some economists in the universities are painfully aware of the need for change, I would say many others are either in denial or just can’t be bothered. The other reason is that economics has such a direct role in public policy and that makes public legitimacy essential if policies are to have the consent of the governed.

The gap between academic and popular economics should not be overstated, especially as more of the academics engage via blogs and social networks. Neither should the fact that there is a gap, not only between the ivory tower and people in general but between the university economists and professional economists in government and business.

I applaud Ms Lord’s efforts on the history front. I do my bit for popular economics, along with heroes like Tim Harford and John Kay, and all the excellent economic journalists we have. There is other post-crisis movement too, as Sara Ledwith reported in her recent Reuters special feature. Planning for a pilot UK Festival of Economics in late November is under way, inspired by the Trento Festival of Economics. A book,

(following up the February conference on teaching economics at the Bank of England) will be out in mid-September. The need for better communication by scholars, highlighted by Ms Jones in the case of historians, was emphasised by almost every contributor to the conference and book.

So I think the gap is narrowing – but then it needs to. 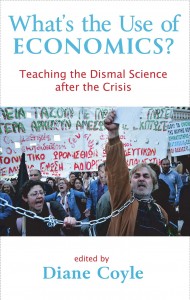