As I was listening to the report on the radio this morning about Aung San Suu Kyi’s first visit to the UK in 24 years, it set me thinking about how much has changed since 1988. The London of those days – a city to which I’d recently moved from the US – was dirtier, not as lively, far less cosmopolitan. We were all much poorer, even the bankers, well worth remembering in the midst of the crisis. According to the new IFS and Joseph Rowntree Foundation study, 3.4 million children here lived in poverty in 1988-89, down to 1.7 million in the latest figures (still too high, but the biggest decline in the years since 1961 when the data start).

Personally, 1988 is so long ago that I was still doing macroeconomics, and hadn’t yet quite begun my 13-year journey in journalism. I had just met the man who became my husband, and our now grown-up eldest son hadn’t been imagined yet. And here is what I was reading in 1988. Some good stuff among the detective novels. Ian Jack’s

is a marvellous piece of reportage about how Britain had been changing in the 1980s. I was obviously also in the middle of a lot of travel writing and a 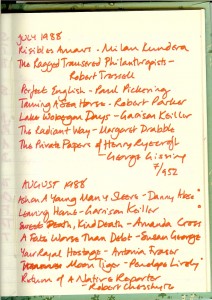 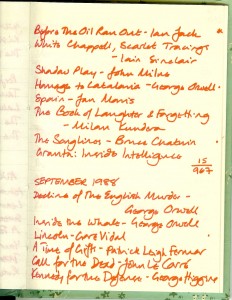 One thought on “A long time in life – and books”