Last night I attended Paul Seabright’s Princeton in Europe lecture, ‘On Lying, Risk-Taking and the Implosion of the Euro.’ The lecture was not, as one might have expected, a trailer for Paul’s forthcoming book,

, although I got my copy last night and am really looking forward to reading it.

[amazon_image id=”0691133018″ link=”true” target=”_blank” size=”medium” ]The War of the Sexes: How Conflict and Cooperation Have Shaped Men and Women from Prehistory to the Present[/amazon_image]

Rather, the lecture followed up a workshop Paul organised last autumn at the Toulouse School of Economics, about the problem of attention. There is a write-up of the workshop, The Invisible Hand Meets the Invisible Gorilla (pdf). Put briefly, we are very bad indeed at paying attention to obvious events, and particularly when either change is gradual or there is a lot going on at the same time so it’s all very confusing.

I tweeted the lecture under the #PUPSeabright hashtag, but to sum up, Paul argued that this attention problem ‘explained’ why so few people foresaw the financial and Euro crisis. The crisis has many causes, it is a complicated phenomenon. Greece – like Belgium – should not have qualified for Euro membership in the first place. The competitiveness of the southern European economies is poor, so for example, the proportion of young Spaniards going to university declined in the 2000s. The loss of the tool of devaluation was crippling. Government spending was unlikely to be controlled, especially as Greece was in the 2000s the world’s fourth biggest importer of arms – extraordinary fact. There was a housing bubble in Spain and Ireland. And so on. The point is that many causes contributed, and unfurled over a long period of time.

In an illuminating parallel, Paul talked about the crash of the Air France 447 flight from Rio into the ocean in 2009. That had various contributory causes, such as a decision to fly through a thunderstorm, a small technical malfunction in the instruments, and so on. Nevertheless, three pilots, two very experienced, ignored a LOUD cockpit warning that the engines were stalling that was repeated 75 times. (See this explanation in Popular Mechanics.) The warning system worked. The humans didn’t pay attention. This is rather sobering if we think we can learn from the financial crash how to build better warning systems, even with data and computer power.

Anyway, a fantastic lecture. Paul is speaking in Bristol on 14th May, this time about the War of the Sexes – do attend if you can. 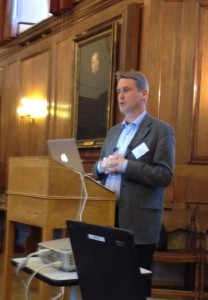 6 thoughts on “Invisible in plain view”