After a Grand Day Out at MediaCity in Salford, being introduced to the Queen as she arrived to open BBC North officially, I travelled home reading Steven Johnson’s

. I mean no disrespect to a terrific science writer when I say it’s the perfect book for a train or plane journey. The comment is about the felicity of his writing style, the interesting but not overly-demanding material, and the ideal length. 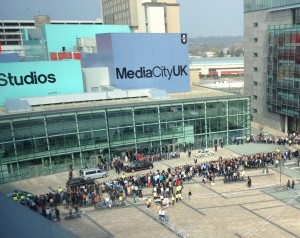 The Queen has a Grand Day Out

The book organises a history of the origin of some important ideas according to the way they came about, with an underlying thesis that there is a false myth of an individual having a Eureka! moment; in fact most important innovations have come about through the work of a group or network of people bringing together different ideas, and for the sake of the ideas not because of the pressures of the market. Johnson argues that the ‘fourth quadrant’ of networked and non-market discovery has always been the source of most good ideas, and increasingly so over time.

I would agree with much of his argument along the way – the importance of an open mind and a maverick nature, the fruitfulness of work across disciplinary boundaries, the importance of a diversity of experience and unexpected collisions of ideas. Johnson sees markets as the driving force for patent and copyright protection, inhibiting the spread of innovation. However, the economics of patenting emphasise a balance between modest time-limited monopolies and the diffusion of innovations, while today’s reality of excessively long protections that last many years after originators’ deaths and create patent thickets are the result of monopoly power in those industries. I think that because of this misinterpretation he greatly underestimates the role of competition in markets alongside collective, and publicly-funded scientific discovery. Competition is the process through which new ideas are implemented. Many fall by the wayside if there is no commercial incentive or opportunity (because of monopoly power) to put them into practice.

That caveat aside, I enjoyed the tales of innovation well told, and also the practical advice about how to cultivate slow hunches and new ideas – write things down, use software (Johnson is a huge fan of DevonThink). Oh yes, keep an open mind and explore the boundaries of what you know.

2 thoughts on “How to have good ideas”