One of the striking aspects of the Occupy movement is its claiming of some open spaces in major cities, striking because it puts a line in the ground (literally) against the steady erosion of urban public space during the past quarter century. Many people have written about this, prominent among them the more-or-less-mystical geographer of London, Iain Sinclair. The relentless building of mega-towers on all possible sites in financial hub cities like London and New York,  the enclosure of open space in private malls, the design of street furniture to make sitting down (never mind sleeping) a challenge, the bearing down on demonstrations and gatherings and even photography on the grounds of law and order or security, have all contributed to discouraging public gatherings. A large part of the tizz among the top brass at St Paul’s Cathedral has been due to their internal debate about whether or not to turn to the law to evict the Occupy tents from a small area of land at the side of and in front of the Cathedral.

As a serious walker, one who would rather hoof it for half an hour than take a taxi between meetings, I’ve long regretted the increasingly antiseptic character of a number of western cities, London among them. A book I finished yesterday,

by Rebecca Solnit, drove home the political aspect of the enclosure of formerly open and public urban spaces. Writing about her native San Francisco’s parades and protests, she writes:

“This is the highest ideal of democracy – that everyone can participate in making their own life and the life of the community – and the street is democracy’s greatest arena, the place where ordinary people can speak, unsegregated by walls, unmediated by those with more power. It’s not a coincidence that media and mediate have the same root; direct political action in real public space may be the only way to engage in unmediated communication with strangers, as well as a way to reach media audiences by literally making news. ….. Parades, demonstrations, protests, uprisings and urban revolutions are all about members of the public moving through public space for expressive and political rather than merely practical reasons.” (p216)

Thanks to Occupy, she can add encampments to that list of manifestations. The same impulse for everyone to be “a producer rather than a consumer of meaning” lies behind radicalism in the arts, whether Joseph Beuys’ call for “Everyone an artist” or punk’s insistence on DIY roughness. Such movements emerge in times of economic crisis, like the late 1970s as well as now. But the serious political impact of the Occupy movement on the establishment, in all its branches including the ecclesiastical, is due to that literal occupation of public space. 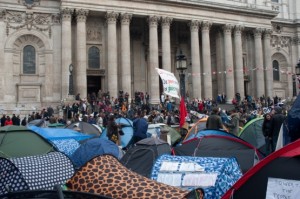