This weekend I’ve read a fascinating pamphlet published in 1983 by the BBC’s Education Department. Towards Computer Literacy (pdf) describes a 1982 TV series educating the general public about computers and programming, and the wider computer literacy project the BBC launched around the series.

The project included materials for schools; outreach to computer societies and clubs, further education colleges, and a host of other bodies; the establishment of a standard BBC version of the Basic programming language; and of course the development of the BBC Micro. This wildly successful home computer launched many a career in the industry, such as that of David Braben, who co-wrote Elite and is now behind the Raspberry Pi; and indeed a number of important companies including ARM Holdings (the descendant of Acorn which developed and manufactured the BBC Micro). 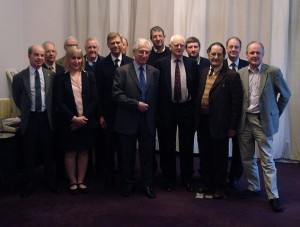 The people who made the BBC Micro happen, at a 2008 reunion (from Wikipedia)

The pamphlet is a fascinating read. There was a more colourful account in the BBC 4 programme The Micro Men but its focus was on Acorn. The striking thing about the project as a whole – in addition to its remarkable impact on the skills and enthusiasm of a whole generation, and on British industry – is what an extensive effort it was. It involved the co-ordination of a host of organisations and individuals, and all before we had email too. There’s an introduction by Aubrey Singer, then the Managing Director of BBC Television, which ends:

“This booklet tells the story of success in the beginning, but the real measure of it lies in the achievements of our audience in the years ahead.”

Twenty eight years later, it still looks like a story of success on this count too. Well worth a read. 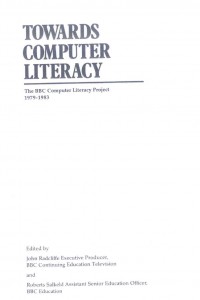 PS One reason for my interest in BBC history is that I’m Vice-Chairman of the BBC Trust.

12 thoughts on “The BBC Micro and computer literacy”